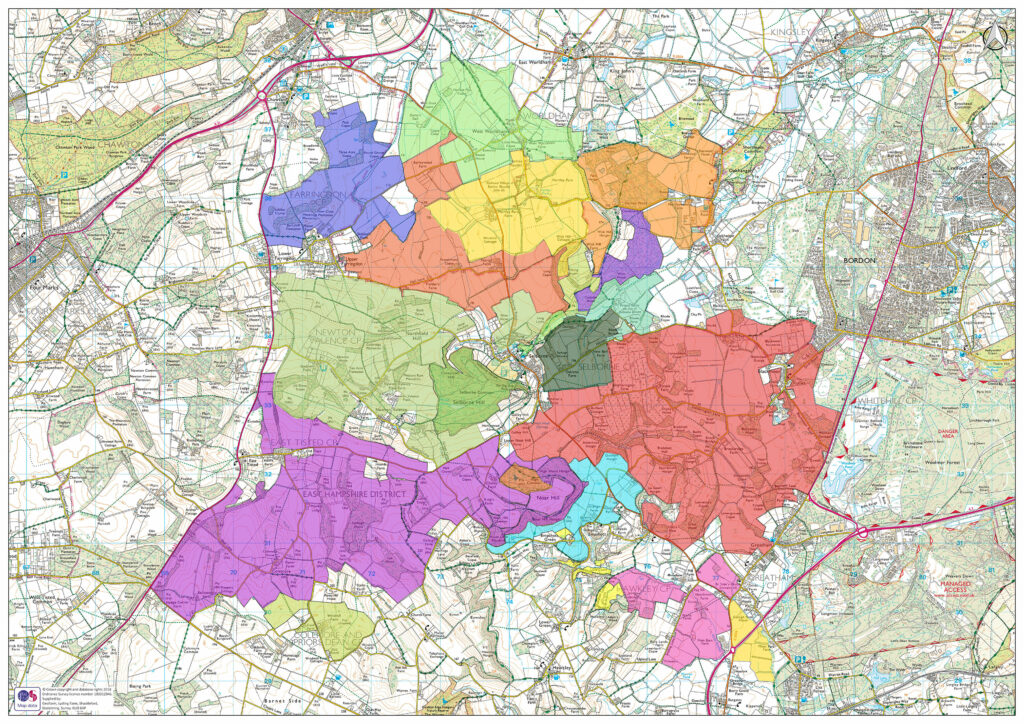 In Selborne, 16 farmers with a total of 10,000 acres (4,000 hectares) surrounding the village have joined together to form a cluster group − the Selborne Landscape Partnership (SLP) − to coordinate the environmental work that is being undertaken on farms locally.

In addition to the 16 farmer members, there are four other important group members: the National Trust (NT), at Selborne Common and the Lythes; The Hampshire and Isle of Wight Wildlife Trust at Noar Hill; the Woodland Trust at Binswood; and Gilbert White & The Oates Collections in Selborne village. The cluster group gains enormously from the expertise and enthusiasm of these four partners. Support is also received from the cluster’s advisors and stakeholders: The South Downs National Park Authority (SDNPA), Natural England (NE) and the Game & Wildlife Conservation Trust (GWCT).

With Gilbert White’s Selborne at its heart, the cluster group’s aim is to adopt a joined-up approach to nature conservation, building on the existing environmental work that is already being successfully undertaken alongside conventional modern-day farming activities.

The English countryside is primarily a managed and farmed landscape, and much of the biodiversity is as a result of the way in which the land is used. With a more joined-up approach to individual farm conservation activities, the cluster group plans to establish wildlife corridors and restore the interconnectivity between habitats across an entire landscape. This collaborative work includes managing a network of hedgerows and purposely created field margins; planting a mosaic of seed mixes for winter bird feed and wildflowers for insects; winter supplementary feeding, which involves spreading seed-food during the ‘hungry gap’ from January to April, when natural seed sources are depleted; and the management of ponds and woodlands, etc.

The farmers within the cluster have selected a number of flagship bird, mammal, insect and reptile species on which they intend to focus their conservation efforts. By monitoring these species, they hope to demonstrate that their conservation work is achieving positive results, while also enabling them to better target their future conservation work. The work that they do for their target species also benefits a wide range of others.

Positive stories tend not to be regarded as newsworthy, but in 2016 the Selborne Landscape Partnership did hit the headlines with national press coverage on one of its target species − the harvest mouse. This mouse was first identified as a separate species by Gilbert White, who in November 1767 wrote:

I have procured some of the mice… They are much smaller and more slender than the [house mouse]; and have more of the squirrel or dormouse colour: their belly is white; a straight line along their sides divides the shades of their back and belly. They never enter into houses; are carried into ricks and barns with the sheaves; abound in harvest, and build their nests amidst the straws of the corn above the ground, and sometimes in thistles. They breed as many as eight at a litter, in a little round nest composed of the blades of grass or wheat.

With only one harvest mouse nest recorded in the Selborne area since the 1990s, it was feared that the species was locally extinct. This prompted the farmer members, alongside a group of volunteers, to conduct a harvest mouse survey, resulting in more than 470 nests being recorded during 2014 and 2015. The tennis-ball-sized nests, constructed of woven grass, were predominantly found close to hedgerows in arable field margins, which are established and managed specifically for wildlife. Further surveys will enable them to continue to monitor this species and to more effectively focus their management strategies. 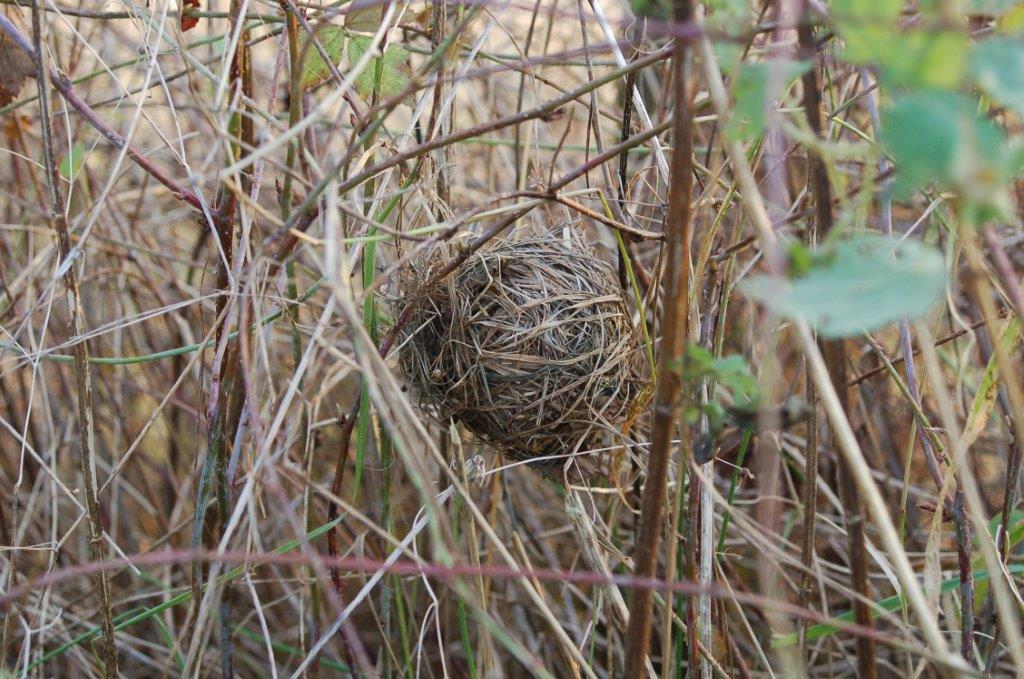 As a result of the harvest mouse surveys, we have learnt that these creatures prefer dense thick hedgerows with tall, tussocky grass margins alongside them − a perfect environment in which to build their nests. With this in mind, a hedge-laying project was undertaken in collaboration with the South Downs Volunteer Ranger Service (SDVRS) in 2015/16, and another for winter 2018/19, to deliver these dense hedgerow habitats. Hedge-laying is, of course, a very labour-intensive and expensive process, and the majority of hedgerows are cut by a flail. A hedge-cutting training day was therefore held at the Rotherfield Park estate, to demonstrate techniques to achieve hedges that provide the structure and habitat to best support not only the harvest mouse but also other species such as the grey partridge and brown hairstreak butterfly.

In preparation for the hedge-laying project, coppicing work was carried out by SDVRS in Selborne hanger woodland, to harvest the necessary hazel stakes and binders that are used to lay hedges. The coppicing also benefited the woodland by creating open areas within the woodland structure, where wildflowers flourished the following spring. Having a variety of ages of hazel within the woods also produces the diverse habitat preferred by a range of woodland species.

Summer 2018 saw the SLP undertake training of its members and volunteers in the surveying of yellowhammers. The RSPB kindly helped by supplying identification training for 14 people, and, subsequently, transect routes within the area were planned and the first surveys carried out. This monitoring will be ongoing, and it has been gratifying to see a healthy yellowhammer population in the area enjoying the well-managed hedgerows and seed mixes the SLP is now providing. The existing success will be built on and enhanced going forwards.

Tussocky grass margins established around the edge of arable fields by many of the group members not only benefit harvest mice and yellowhammers but are also of particular value to barn owls. A number of farmers within the group have erected barn owl boxes on their farms over the past 20 years, and these boxes are now being monitored. During the summer of 2017, successful broods were recorded in nest boxes in 10 of the 15 one-kilometre squares across the partnership. Checking the rings on the adult barn owls has also shown how birds that fledged in the south of the SLP area are now breeding in the northern part of the partnership and vice versa. This monitoring is continuing, and in 2018 the results have again been positive, despite the very wet winter of 2017/18 followed by a prolonged hot and dry summer. 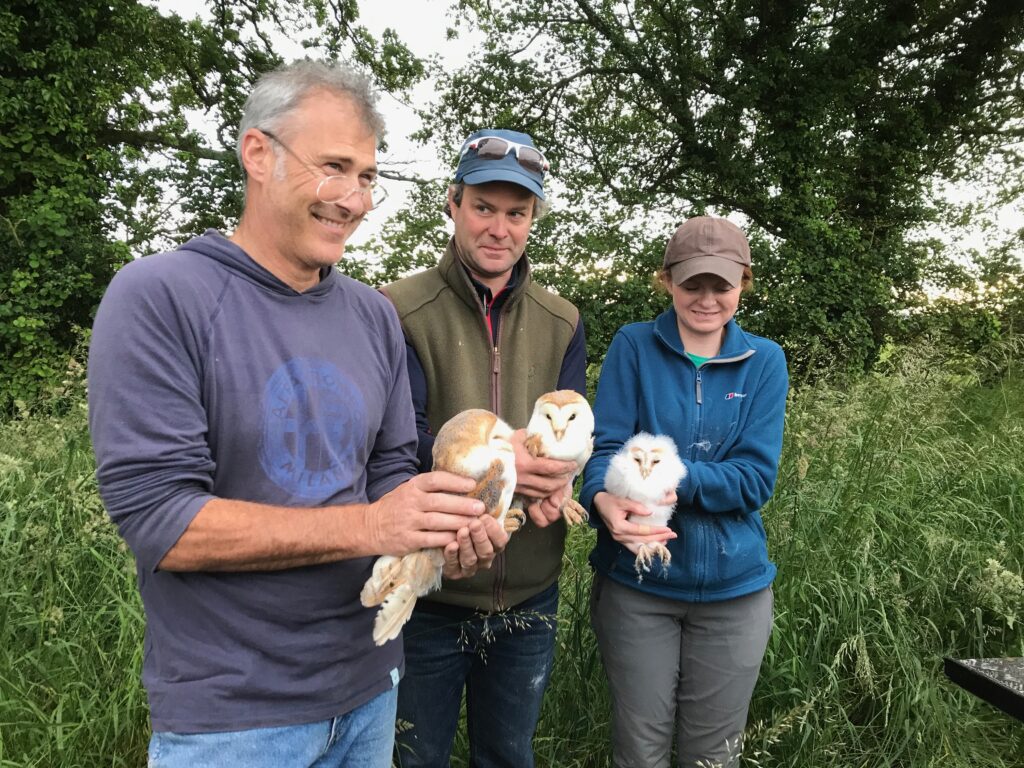 Another flagship species is the lapwing. With populations still declining nationally, the group is targeting a particular conservation effort on this species, encouraged by the fact that there are still known to be breeding lapwing pairs within the SLP area. With this in mind, on a freezing Friday in February 2018, a number of the group’s farmer members met Francis Buner of the GWCT and Bruce Fowkes of the RSPB to discuss the management of lapwing nesting plots at Rotherfield Park. The aim of these plots is to provide suitable nest sites within arable fields. Strategically positioned, the one-hectare plots are cultivated in autumn/winter and then left unsown in the spring. Recent studies have shown the importance of planting a cover crop adjacent to these plots to supply foraging habitat and protective cover from predators. Group members are experimenting with this concept, siting plots where lapwings are either known to breed or to have bred in recent years.

Also in 2018, the SLP cluster group took part in the South Downs Farmland Bird Initiative’s lapwing survey − a project that has been monitoring lapwing on the South Downs for several years and more recently started to collect data on chick survival. In this year RSPB volunteer Mark Pirie undertook lapwing survey work. Of the four farms that took part in the survey, one farm had a pair of adults successfully fledge chicks within a crop of oilseed rape. Two other group members reported successful nest sites − one within a crop of spring barley and the other in a purposely cultivated lapwing plot. The aim is to reverse the local decline in lapwing numbers through a better understanding of their needs and, as a result, even more effective land-management practices.

Noar Hill Nature Reserve and Selborne Common are home to two rare species of butterfly: the Duke of Burgundy and the brown hairstreak. A great example of both the landscape-scale approach to nature conservation and the benefits of collaborative working is demonstrated by the downland restoration project undertaken by Blackmoor Estate. An area of land between Noar Hill and Selborne Common that was formerly in arable use has now been successfully converted to chalk grass downland. In collaboration with the NT and the SDNPA, green hay was harvested from its flower-rich meadows in the village and this green hay was spread by volunteers on the prepared arable land. 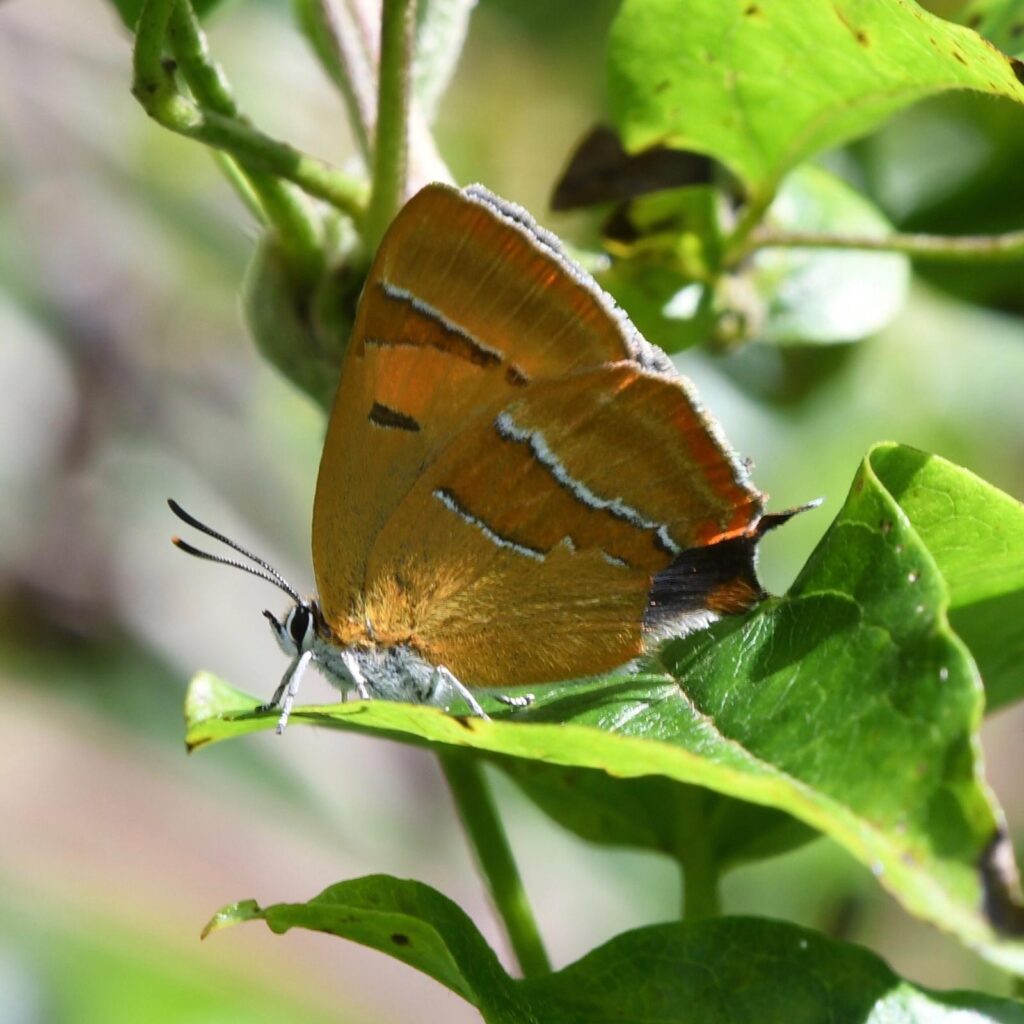 After a period of careful management, the newly created meadow now has a wide variety of plant species that benefit these two rare butterflies along with numerous other species. Linking these known butterfly hotspots boosts the resilience of those populations to threats such as climate change. The meadow creation has been such a success that it is now being used to supply seed for further new meadows in the SDNP.

During the spring of 2018, in collaboration with SDVRS volunteers, cowslip plug plants were strategically planted in grass margins around the edge of arable fields adjacent to Noar Hill, to encourage the Duke of Burgundy to widen its range; cowslip is the main food plant for this species. This project was extremely successful, with more than 400 plants being planted, and the intention was to repeat this activity later in the autumn.

A brown hairstreak egg count was also planned across the partnership for winter 2018/19 to continue the existing survey work carried out by the NT, to identify areas where this species is present in and around Selborne village. The survey will allow us to better tailor our management practices – in terms of hedge-cutting and margin management. The brown hairstreak lays its eggs on young blackthorn suckers at the base of hedgerows, so, if a hedge or margin can be cut on rotation rather than annually, this means there will always be suitable egg-laying habitat available. A follow-up hedgerow management training event for group members was scheduled for later 2018.

In 2016 the SLP cluster group appointed a conservation advisor or ‘facilitator’ to assist the group in devising its aims and objectives, selecting its target species and developing conservation projects. The group’s facilitator provides support to the group and its members, coordinating group activities, training events, meetings, species monitoring and knowledge transfer. This facilitating role is funded for five years by NE.

The group meets formally twice per year to discuss existing and planned projects. From these meetings various other sessions are organized, so that members of the cluster can learn from others within and outside the group that have experience or expertise of particular land-management and conservation techniques. Hearing about other work that is going on within the cluster group area is inspiring, and all the members of the SLP take pride in their conservation work. It is very rewarding to see the positive results of the work that has been ongoing on the farms. The fact that Rotherfield Park Estate has scientifically proven data showing increasing numbers of farmland bird populations is encouraging and demonstrates that this landscape-scale approach to nature conservation does work.

All of the farms within the SLP are commercial farming businesses whose primary objective is food production, and we are very fortunate to have a diverse range of farming types in the locality. These include beef and dairy farms, sheep, orchards, speciality flowers (e.g. lavender) and combinable crops such as wheat, barley, oilseed rape, linseed and oats. It is these viable farming businesses that have the ability and desire to deliver significant environmental benefits and that are carrying out this valuable conservation work with the support of NE, GWCT, SDNPA and NT.

We are convinced that a collaborative and mutually supportive approach to nature conservation across the SLP’s area will deliver what we’re seeking − a diverse and vibrant wildlife population.