A whopping 79 clusters took part in BFBC this year. It’s easy to see why – a bird ID session makes the ideal mid-winter cluster event – and there is a compelling story to tell through the publication and promotion of the results.

Some of you, for example the Tove Valley and the Thame Catchment Farmer Groups, have requested their members’ data from the BFBC database, so that they can feed back to the group exactly what was seen collectively in their area. If you’d like to do this for your group, please get in touch via www.bfbc.org.uk.

Over 1500 farmers took part and recorded more than 120 species across 1.4 million acres. That’s more farmers than in any previous year.

The BFBC was launched in 2014 to highlight the positive work done by farmers and gamekeepers in helping to reverse the decline in farmland bird numbers. The count offers a simple means of recording the effect of any conservation work currently being instigated by farmers and gamekeepers on their land, such as scatter feeding birds through winter or growing crops specifically to provide seed for birds.

What did farmers see?

The most commonly seen species were blackbirds and woodpigeons, seen by over 75% of our participants. Robins, blue tits and pheasants were seen by over 70% of the farmers.

The graph below shows the full list of the 25 most commonly seen species. 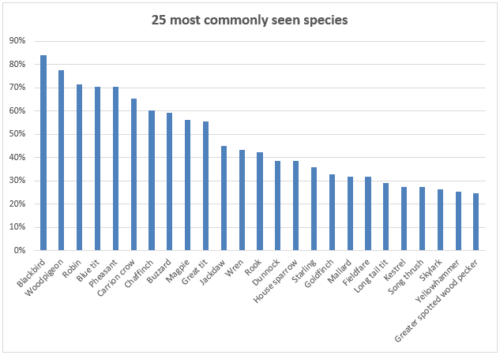 At the other end of the scale, we were delighted to see that a total of 25 species from the Red List for Birds of Conservation Concern were recorded, with 9 appearing in the 25 most commonly seen species list. Fieldfares, starlings, linnets and lapwings were the four most abundant red listed species recorded with over 67,000 total spotted which equates to 24% of all species spotted.

The five most abundant birds seen were starlings, woodpigeons, rooks, fieldfares and pink-footed geese. A total of 113,729 were found, making up over 40% of the total number of birds recorded.

9 of the top 25 most abundant species are on the Red List for Birds of Conservation Concern including: starlings, fieldfares, lapwings, linnets, redwings, herring gulls, yellowhammers, house sparrows and skylarks. 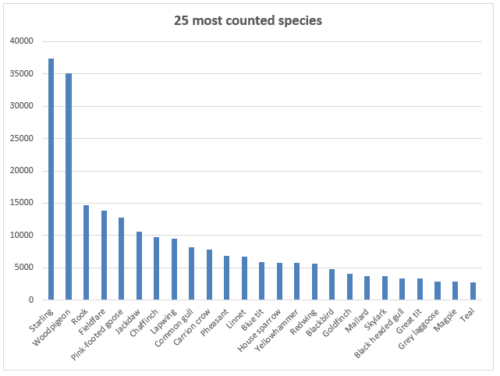 The average farm size of those taking part was 920 acres.

49% of participants are in some form of agri-environment scheme, demonstrating their long-term commitment to environmental management.

36% of participants were providing some form of extra seed feed for birds, either through growing wild bird seed mixes, or by providing additional grain through scatter feeding or via hoppers.

Where were participants from?

Farmers from every county in England took part and there were also responses from Northern Ireland, Scotland and Wales. We also had a number of farmers from Austria take part!

Norfolk had the most returns, with 129 farmers completing the survey. This was followed by Hampshire with 116, Wiltshire with 68, and Suffolk with 67. Our thanks go out to these counties for their huge support.